U bent hier: Home / Ecologie / Today’s tipping points in the context of evolution

Tipping points and turning points: words that keep sustainability professionals and socially engaged citizens occupied and that are used a lot, often in combination with terms like change and transition. They are words that conjure up fear and hope. Fear stems from the rise in temperatures and associated climate change with its irreversible consequences, to name just one example. Hope accompanies our attempts to initiate transitions and transformations as a response or countermovement to the negative tipping points we see coming, initiatives such as the Climate Agreement and circular economy. 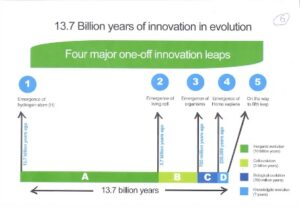 Some 13.7 billion years ago, the first atom emerged, a turning point that marked an inorganic  period of evolution lasting about 10 billion years. During this period, there were numerous innovations that were more stepwise from an evolutionary perspective. Examples include the emergence of molecules such as the prominent water molecule as well as crystals, minerals, stars, the earth and other planets.

This period ended with the second major turning point: the emergence of the living cell.

The third major leapwise innovation was the emergence of organisms. This leap initiated biological evolution. Parallel to the emergence of the first multi-cellular organism, some 700 million years ago, the phenomenon of meiosis emerged. This would be an incredible catalyst for the development, multitude and diversity of organisms on earth. Forms of life became more and more complex as well as vulnerable.

Nowadays, when evolution is the subject of conversation, it is the above time span that is  meant even though, in fact, it was preceded by a very long period. Something worth noting is a statement by Linnaeus, supported by Darwin: ‘Natura non facit saltus’ or ‘Nature does not proceed by leaps,’ a view that has been superseded.

The fourth and final major turning point ‒ about 200 thousand years ago ‒ is the emergence of Homo sapiens, human beings with a self-reflective consciousness. Endowed with five senses and a self-reflective consciousness, Homo sapiens embarked on a path of discoveries and inventions that ultimately led to an explosion of human-driven innovations. We call this period knowledge evolution. The technological development it gave rise to meant that humans were suddenly able to operate far beyond their natural capacity and, thanks to ICT innovations, even beyond their own ability to think .

In this current phase of evolution, we as humans have assumed the roles of main actor and co-director.

When we consider the entire 13.7-billion-year evolutionary process, we see five characteristics:

Living and acting as a self-reflective, conscious human being during the evolution of knowledge

Whereas the measurable and non-measurable components seemed to function interactively during the evolutionary period preceding human existence, human beings with their self-reflective consciousness have steered mostly towards the measurable component: science with ‘to measure is to know’ as its mantra rather than amazement at and respect for phenomena in nature and society that are difficult or impossible to measure, unfamiliar or unknown. Examples of such phenomena can be found in the ecological, ethical, sociological, psychological, religious and artistic spheres. Together with the increasing specialisation in the innovation process, at the expense of an integral approach, it has meant that the evolutionary process is no longer coherent, or worse, has been seriously disrupted. We are now on the eve of a period where we might have to face the bitter harvest of this imbalance.

Might because, as organisms with a self-reflective consciousness, we have the possibility and capacity to turn the tide. It does require that, amidst all the complexity, we take and keep note of evolution’s coherence and let the non-measurable elements back into our innovation processes as well as our daily actions.

In doing so, we should realise that we are on our way towards the fifth major turning point. A characteristic of turning points is that we can actually only observe in hindsight that they have taken place. And we do not know what exactly a turning point will bring. But the evolutionary process, with its four major turning points and many smaller tipping points, shows that logically there will be a higher degree of ‒ collective ? ‒ consciousness.

To turn the tide of incoherence, we will as of now have to make way for the above non-measurable characteristics. You may well ask how. There is no rational answer. But evolution, with its fourth turning point, has given us a self-reflective consciousness. So we carry in us the capacity to innovate coherently, notwithstanding the continuously growing complexity.

Developments surrounding the themes of consciousness, or awareness, and innovation are already visible in present-day society. One example is Otto Scharmer2, a senior lecturer at MIT, who talks about the evolution of awareness via his oft-cited ‘from ego-system awareness to eco-system awareness’. And scientist Sarah Durston is exploring the boundaries of brain science and consciousness3.

As a co-director of evolution, we can turn approaching tipping points into a turning point if we take the step towards coherent action and coherent innovation.

Apart from planetary tipping and turning points or social and ecological developments, we can also see the consciousness-raising process itself as a turning point.

Is the higher degree of consciousness a tipping point? Or could it be the fifth major turning point? Or will complexity and the lack of coherence lead to an ‘earthly catastrophe’ of mass extinction? This would then be number seven, with the first six extinctions occurring during the biological period of evolution and accompanying invasive cosmological conditions but the seventh constituting a process of extinction partly caused by the human race.

What we can do in any event is to act with coherence and embrace consciousness, perhaps in a deeper form. We need to try to understand the process of consciousness and make that process a structural element of our actions. We will then find that this will allow our own as well as our collective consciousness to grow and enable us to turn the corner into coherent innovation ‒ all in a world where this is made more and more difficult by the growth in complexity but where it is absolutely essential.

Allerd Stikker and Else Boutkan