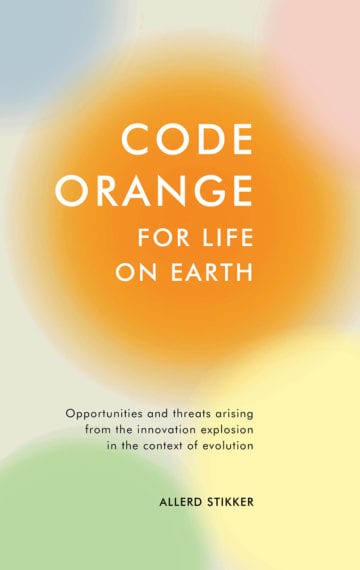 The essay ‘Code orange for life on earth. Opportunities and threats arising from the innovation explosion in the context of evolution’ can be ordered as paperback and e-book from MijnBestseller, or as e-book through Bol.com.

‘Code orange for life on earth’ puts the present-day explosion in innovation into the context of evolution. It allows Allerd Stikker to open up a new layer in the discussion about the future of the human race. By means of four major innovative leaps in evolution, he describes how the innovations preceding the emergence of Homo Sapiens took place with an uninterrupted coherence and balanced interaction between measurable and non-measurable values.

It seems that, since that time, humans have almost exclusively focused on the material and measurable aspects of innovation. All the signs show that, if there are no corrective adjustments between 2020 and 2050, this behaviour could lead to a serious derailment of nature and society. Stikker points out the opportunities that exist to turn the tide in time to prevent a new but harmful evolutionary innovation leap from arising in the near future.

When I enrolled on the chemical engineering course at TU Delft in 1946, I could not have suspected that 72 years later I would be working on an essay addressing the opportunities and threats associated with technological innovations. Since my days at Delft, the population on earth has grown by 4.5 billion people. In the last two centuries, we have launched two large-scale waves of innovation around the globe. The first wave covers the steam engine, the combustion engine and electricity generation – all based on fossil fuels – in the 19th century, and the second the chemical engineering innovations of the 20th century.

But the major benefits of these innovation waves for the comfort of humanity now appear to have some serious adverse side effects. We are dealing with global warming, pollution of the air, water and soil, depletion of natural resources, and a decrease in biodiversity. And now we are in the middle of the third wave: the innovation explosion of information and communication technology (ICT) with as yet unforeseeable but potentially harmful effects. There is much speculation and assertion but opinion is deeply divided.

This essay is the outcome of a collaboration with Else Boutkan and Maja Nijessen, together with advice from Maurits de Boer, Arie Bos, Caroline Figueres and Leonor Lindner and support from Lia Otterspeer and Tess Kamphorst. Designed by Rosa Vitalie. Vormgeving Rosa Vitalie.

The essay ‘Code orange for life on earth. Opportunities and threats arising from the innovation explosion in the context of evolution’ can be ordered as paperback and e-book from MijnBestseller, or as e-book through Bol.com.